I have been advised by an anti-secessionist blogger in Vermont that The Ohio Republic is a "neo-Confederate, neo-Nazi, Paleoconservative, Racist, White Separatist, anti-Government Sovereignty Activist," or at least one of "Their Enablers and Supporters." For several years, The Ohio Republic was listed in his ordinary Links section, but the writer, a pseudonymous "Thomas Rowley," has decided that it deserves to be classified as shown above because


On a more personally disappointing note, I've moving the Ohio Republic blog to [this category], not so much because its author, Harold Thomas, espouses the sort of virulent hatred that oozes from sites like [two Vermont secessionist websites and Rebellion, originating from the League of the South], but because of the open support he offers Tuggle's vile LOS website.

I cheerfully plead guilty to Paleoconservative and maybe even Anti-Government Sovereignty Activist, which I suppose is what he would call anyone who stands up for the Constitutional rights of the states. Neo-Confederate? The term is highly controversial and as the politically neutral site WordIQ notes, is frequently used as a pejorative ad hominem attack. I am the direct descendant of a Confederate soldier, and therefore can easily relate to Southerners wishing to honor their ancestry. Beyond that, how the South wants to decide its future is none of my business.

The League of the South really is a controversial organization, and does include some avowed white supremacists among its leadership. However, the League does not openly espouse racism in its policy statements (unless "Anglo-Celtic culture," which it desires to promote, is a code phrase for racism). Rebellion is the blog of the League of the South. I sometimes comment there, but I also disagree with it on racial issues. However, the blog covers many other subjects; and overall is well written, well researched, and certainly not "vile."

My own views should be clear from reading the posts in the Racism label on this blog. I have criticized in this space Rebellion's propensity for trivializing the accomplishments of Dr. Martin Luther King, Jr., and for supporting disruptions to celebration of Dr. King's birthday. In addition, I have repeatedly highlighted the work of African-Americans who are outspoken in defense of liberty, not just for some, but for all of us.

Mr. "Rowley" enthusiastically supports the Southern Poverty Law Center, itself a controversial organization, which last May libeled former Ohio resident Jason Rink by putting him on their "Hatewatch" list for working with the Tenth Amendment Center to organize the Nullify Now rallies.

In fairness, he has done his fellow Vermonters a service by exposing white supremacist attitudes and general buffoonery among members of that state's secessionist movement.

So, to summarize Mr. "Rowley's" position, I am a "neo-Confederate, neo-Nazi, Paleoconservative, Racist, White Separatist, anti-Government Sovereignty Activist" or fellow-traveler because I sometimes comment in a blog sponsored by an organization that is not avowedly white supremacist, but includes a few white supremacists among its leadership; despite the fact that I have criticized that same organization when I disagreed with it, particularly on racial issues, have always shown minority individuals the same respect I would show for anyone of my own race, and have publicly encouraged those who support liberty.

It seems reasonable to conclude that Mr. "Rowley's" real agenda is to shut down opinions contrary to his own by fixing emotionally charged labels on his political opponents. Those who insist on "political correctness" want to shut down discussion that seeks the truth, rather than engage its participants in a mutually respectful exchange of views. As long as this cancer continues to affix itself upon the American body politic, we will be unable to hold the honest and frank discussions that we need to solve our political problems in a way that will promote liberty and justice for all.
Posted by Harold Thomas

Well, that's one more reason to put a few of us on the Indefinite Detention list when the boot comes down. I'm sure "Thomas Rowley"'s toe will be firmly ensconced within the boot. 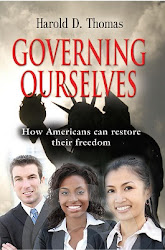